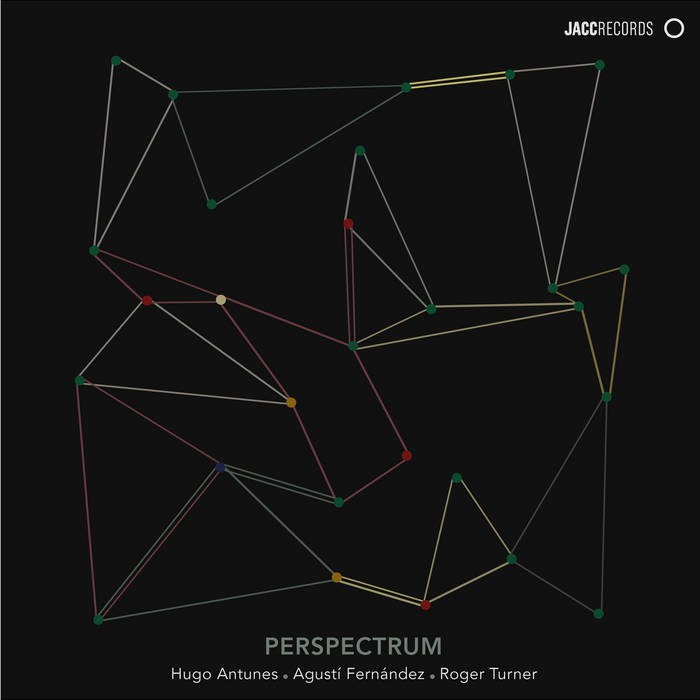 Cover Art based on the work "Sem Título" by Marco Franco.

“Perspectrum” is the 39th release of JACC Records and it sprang from the recording of a concert at Convento de S. Francisco, during the Jazz ao Centro Festival 2016. “A work of sonic bricolage [...], full of spaces and dynamic, taking advantage of the reverberation of the church and the way in which the architecture of the place sculpts the timbres. ” as said by Rui Eduardo Paes in the Jazz.pt Report, it is a brilliant work by the trio Antunes, Fernández and Turner.

HUGO ANTUNES is a Portuguese double bass player. Born in Barreiro, Hugo's musical career had a later start than usual. Already 26 years old, he began to study electric bass at the Luis Villas-Boas Jazz School (of the Hot Club of Portugal) but, after six months, he moved to the double bass. He studied at Amsterdam’s conservatorium, and after a period in Portugal, moved to Brussels where he established strong partnerships with European musicians, maintaining projects with figures as disparate as Paul Lovens (a history of European Jazz) or Nastio Mosquito. He returned to Portugal in 2018.

AGUSTÍ FERNÁNDEZ is a spanish pianist with a perfectly based career and a well-deserved international reputation, being one of Spain’s musicians with major international projection and a world reference in the field of improvised music. Fernández has worked with famous musicians of the free improvisation scene like Peter Kowald, Derek Bailey, Butch Morris, Evan Parker, Barry Guy, Mats Gustafsson, Joel Ryan and Peter Evans a.m.o. He is a member of the Blue Shroud Band, Mats Gustafsson NU Ensemble and Barry Guy New Orquestra. Up to the current date he has published more than 80 discs.

ROGER TURNER is a percussionist with a career with 50 years, a giant number of collaborations and over 30 albums since 1966, the year in which he made his first improvisation performance at the British Council in Brighton with Chris Biscoe. Soloing in electro-acoustic ensembles with visual and performing artists or jazz ensembles, he has shared stage and staves with Annette Peacock, Cecil Taylor, Masahiko Satoh, Lol Coxhill, Otomo Yoshihide, Alan Silva, Axle Dorner and many more. all over the world.