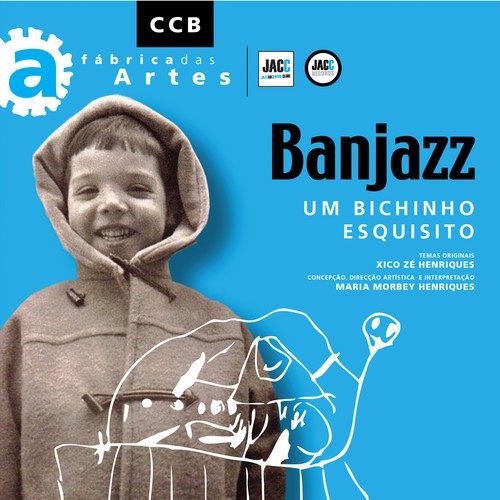 In the journey of a composer through the melodies and harmonies he builds, or that, for some mysterious reason, he reaches, there are unexpected surprises. As well as in the musical composition not all is intended by the creator, but also the work of Nature, the creator becomes the vehicle, his senses are alert, his keen intuition aroused.

In the musical background of Xico Zé Henriques (Composer) arose by chance (if we consider that it exists), jazz compositions referring to the infantile world, build up inside, to cherish.
The composer went back to his childhood through his children, grandchildren, or himself, as a child.
Jazz Themes made for children gained an individual life. The images suggested by the melodic emotions and semantic fields run free, as kids, in open air and green meadows, in deep blue. This is the springboard to a concert where the drama works as support, through an actor and a singer/actress, who weave stories and movements while keeping their own musical creation in the foreground.
This organic starting point breathes through the six musicians and the timbres of their instruments, which they embody. They are the raw material, and perform on stage the jazzy intention of the author, inherent to his personality - their choices at the heart of his music.
Jazz as freedom, cultural fusion and harmonic complexity made simple and light by true "Jazz Men" or, perhaps, "jazz children", since their mutation will take place on stage, through the magic of music. These "old ones" are the pioneers, the little ones of this world; the "New ones", the solemn children’s audience, is invited to climb to their piggyback in order to see and hear even further than them, the pioneers, supported by their knowledge, receiving and experiencing their intuitive wisdom. In the Jazz initiation ritual the "disciple" has the opportunity to become wiser than the "old master".
In the enterprise to make this proposal an art object, something palpable, audible, visible and responsive to children, we start from children’s everyday life, the challenges, fears, achievements, joys and trials of all that is the adventure of growing up, and simultaneously a desire to preserve the innocence of a child, to be a little Peter Pan flying through life. We talk about the frenzy of learning to swim, the excitement of high speed cycling, the cool water from a secret source in the land of their grandparents, the mystery of the dark, enchanted woods and gardens, picnic on checkered tablecloth on soft turf, the weird bugs that live inside the bodies of children and adults and that dance to the music!
To want to explain in words what Jazz is, is an impossible and fruitless mission. We will invite kids and adults to feel it, live it in first person, because we want the interaction and sharing of a common language that is music, which has its foundations in the maternal heart beat, when it lived in a house call round belly, the place prior to the first breath and first vocalizes. So music is the mother tongue, the freedom inherent to jazz and permeable to influences, from near and distant places, where all types of music spring like flowers.
Banjazz is the name of a weird bug, bug-eyed and beautiful, an astonished looking bug by the music, which is its food. It opens the door for exploration of musical elements (improvisation, the chase, the swing, the exotic rhythms that jazz adopted in its journey around the world) made images, embodiment, stories and emerging feelings, dramaturgically sustained in a live concert, that is not exhausted in the sound of the clapping.