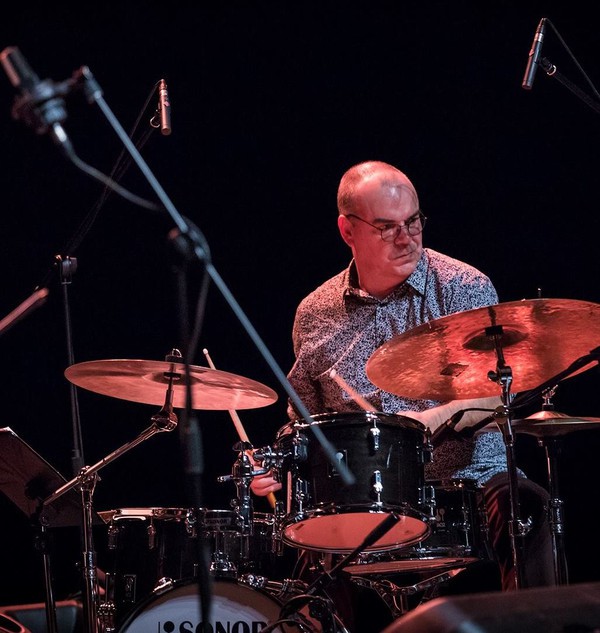 In 1994 he was asked to co-direct with Bill Goodwin (drummer for Phil Woods' Quintet) the drum and percussion program for Artico, an organization sponsored by the European Union, which held courses for professional musicians in the Lisbon area. Also self-taught on the saxophone, he studied improvisation with Prof. Alberto Jorge. He has been studying alto saxophone and composition since 1998.

He is co-founder of the “world music” project – Adufes – commissioned by the Expo 98 Commissioner. He recorded the album “which way what” by saxophonist composer Patrick Brennan with the participation of bassist Rachim Ausar Sahu. He performed several concerts with this band, having as guest soloist the trombonist Steve Swell, one of the great names of world improvised music. Participates with Paul Dunmall (tenor sax), Dave Kane (double bass), Rodrigo Amado (baritone saxophone) at Atlantic Waves 2003 , as part of the BBC Jazz Festival in London.

He is co-founder of an improvisation ensemble with 4 drums (Acácio Salero, Marco Franco, José Salgueiro, Alexandre Frazão – TIM TIM by TIM TUM. He recorded an album in which one of the great drummers of today's improvised music participates - Jim Black. With TIM TIM by TIM TUM he participated in Nuno Rebelo's project – Guitarras Mutantes commissioned by Expo 98. As part of the pre-opening of Casa da Música (Festival em Obra Aberta), music by Carla Bley was played, directed by her and with the participation of Steve Swallow and Gary Valente. In 2007, he started his project “Acácio Salero -Secret Apache”, with his own compositions. In that year, this project debuted at ACERT, passing through the Cineteatro de São Pedro do Sul, Servartes, and in 2009, it performed at the 7th São Luís Jazz Festival and at Sines em Jazz. In 2009/2010 he is professor of drums at Curso Livre at Escola de Arte de Sines.

Since 2010 he has been teaching at the Escola de Música da Valentim de Carvalho (Porto), Orfeão da Feira (Stª Maria da Feira) and Escola 7 Notas in Maia. In 2013, he joined the group Funky Bones Factory and the trio MAP, both with an album recorded in December 2013 and to be released in the first half of 2014. With the trio MAP, he makes two tours to France to present the album “The Zombie Wolf Playn' The Blues On A Morning Day”. The second, integrated in the fortnight of the Marciac Jazz Festival. In 2015, he released the second album by MAP – Circo Voador.

He maintains his activity as a music teacher at Valentim de Carvalho and at the 7 Notes School of Music.