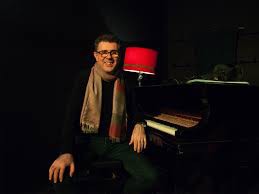 Galician pianist, he began his musical studies at the Conservatory of Ourense – Spain, where he graduated in classical guitar under the teachings of the master Tomás Camacho and immediately takes part in different concerts organized by the Asociación Guitarrística Galega de Vigo between the years 1978 – 80.

He attends the historical seminars of Jazz of Banyoles – Girona (1980-81) organized by the Taller de Músicos, with American Masters of great recognition and international prestige: Thad Jones, Chuck Israels, Hal Crook, Steve Brown, Jim McNeely, Ben Riley, Bill Dobbins,
Sal Nistico, Claudio Roditi, musicians who introduced him into the world of jazz. Alberto learns the true philosophy about this music from these Masters.

Since 1985 its studies are dedicated to piano and it will be with this instrument that he will develop his future professional career focused on the years 1985 and 86, and the events concerning the school Escuela Baio Ensamble.
Between 1996 and 2000 he recorded two pioneer discs in the mixture of Galician folk music with jazz and symphonic music. Ramón Trecet, the director of the program Dialogos 3 of RNE gave name to his style as the “Muiñeira Jazz”.

In 2012 he produced and recorded a new album titled “Villa-Lobos a new way” with the soprano Carmen Durán and the Atlantic Trio (base of the Atlantic Bridge band, formed by bassist Kin García, drummer Miguel Cabana and the own Alberto Conde) with texts by the poet and musicologist JR Bustamante, who revises and adapts to jazz the work of the Brazilian composer Heitor Villa-Lobos. This disc was released in 2013 by Karonte Records, presented and edited with the sponsorship of the Xunta de Galicia.

In 2014 he recorded and premiered a new recording project with the title Human Evolution Music Project in the X Festival Imaxina Sons of Vigo, programmatically revising human evolution and resulting from the crossbreeding of Iberian Jazz with the classical music of India and being pioneer in the interactive dialogue of the piano with the sitar. The disc is released by the label Jacc Records of Coimbra – Portugal.

His creative style mixes different genres of world music with jazz, such as jota, bulería, rumba, pateado, giga, medieval ‘cantigas’, vals-venezolano, vals-modinha, choros brasileiros, afro-pandeirada, alalá-blues, raga… resulting in a sound part of the current World-Jazz of Iberian origin. His discographic work, characterized by maintaining a programmatic line, has its origins in classical guitar, his thorough research into the jazz and his direct relationship with the traditional and popular music, that make a musician with its own voice, considered by critics of RNE as the precursor of the “Muiñeira-Jazz”.