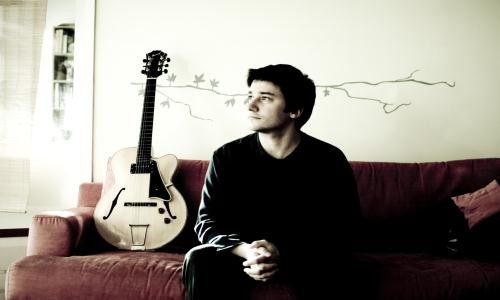 André Matos was born in Lisbon in the eighties. Plays guitar since 9 years old. At 14, he began studying with Mário Delgado, focusing first on jazz improvisation. Briefly attended the school of the Hot Club Portugal. In 2000, he received a scholarship that enabled him to move to Boston and studied at Berklee College of Music, where he was recognized with the William Leavitt Memorial Scholarship. Studied with Mick Goodrick, Ed Tomassi, Hal Crook, Dave Santoro, Rick Peckam and Jon Damian. He has been performing in Portugal with his own projects and with several bands, including most importantly, the Sara Serpa Quintet and Mikado Lab (quartet led by Marco Franco). In June 2005 presented his album " Small Worlds / Small World" in the auditorium of the Olga Cadaval Cultural Center, in Sintra. In 2006, he presented his quartet at the 4th edition of the Jazz Festival in S. Luiz Theatre. He has been performing lately in trio with bassist Demian Cabaud and the drummer Alexandre Frazão.

In the United States, has often acted between Boston and New York. Recently, housed in a cultural exchange project developed by pianist Danilo Perez, traveled to Panama to participate in 5th Panama Jazz Festival, where he performed and presented master classes with a group of New England Conservatory.

In 2006 he won a scholarship from the New England Conservatory (Boston) to pursue studies in a master's program. Since then, has studied with George Garzone, Danilo Perez, Jerry Bergonzi, John McNeil and Brad Shepik.