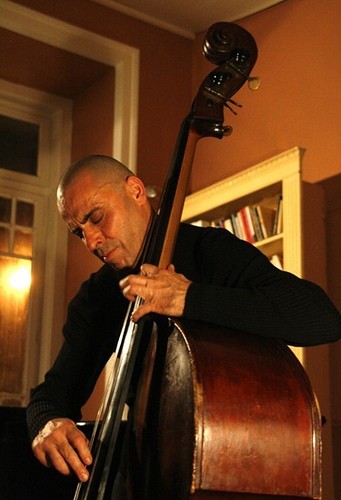 The name of Carlos Barreto is an indispensable reference merit, in the jazz field. growing internationalization of his artistic activity has taken his music to many destinations, both in Europe and in the rest of the world, always with rave reviews by the critics .
Once completed the course at the National Conservatory of Music, CB resided in Vienna (1980-1982) in order to specialize in classical music, he studied with Ludwig Streicher, one of the world's great masters of the bass.
Decides to devote his professional career to improvised music, residing in Paris (1984-1993), the city from which he had the opportunity to work with the greats of jazz, performing in the most prestigious festivals throughout France, Germany, Switzerland, Belgium, Holland, among others.
Return to Portugal in 1993 and started his projects as leader and composer, has recorded 8 CD's on his own behalf and collaborated on more than twenty written by Bernardo Sassetti, Carlos Martins, Bob Sands, George Cables, Mário Delgado, etc. . , and acted in numerous Portuguese and European festivals, with notable aesthetic evolution of his music, from the neo - bop to European jazz of today .