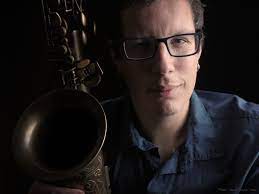 Born in Faro at June 6, 1982. With six years old, Desidério Lázaro began studying Bisel flute and music theory, with 10 years old, he chose to study clarinet. He studied classical music at the conservatories of Faro and Setúbal, later with his mentor and friend Paul Gaspar. While as a classical musician he was a member of the Classical Juvenile Orchestra of the Algarve, the Algarve Brass Orchestra, Camerata Musical Barreiro, Setúbal Conservatory Wind Orchestra, Choir camera Conservatory of Setúbal, several philharmonic bands and music groups camera, taking done hundreds of concerts across the country and representing all the schools he joined. Later, in 2002, begins the study of jazz music and the saxophone in the school jazz Villas Boas (Hot Club) with Paul Gaspar and Pedro Moreira.

In 2004 he moved to Amsterdam where he recently completed his degree with honors in Jazz at the Conservatorium van Amsterdam, where he studied with Ferdinand Povel, Jasper Blom and Dick Oatts. While jazz musician founded two bands with writing music by himself, Urban Connections and Desidério Lázaro Quintet, joined Big Band National Youth as high lead and clarinet, made ​​hundreds of concerts in Portugal and foreign (Athens, Brussels and Holland) as sideman and frontman. Participated in workshops with David Binney, John Clayton, John Taylor, Peter Bernstein, Carlos Barreto, Greg Tardy, Larry Goldings, Chris Potter, among others.

In 2007 he was part of the musical "Cats", with which toured the principal Dutch stages.

Currently, in Portugal, Desidério Lázaro leads his own quartet, with which he played regularly in Holland and did a tour in Portugal in February this year, having played on stages such as the Hot Jazz Club and Wave and received very favorable reviews. He teaches saxophone at the Hot Clube de Portugal.