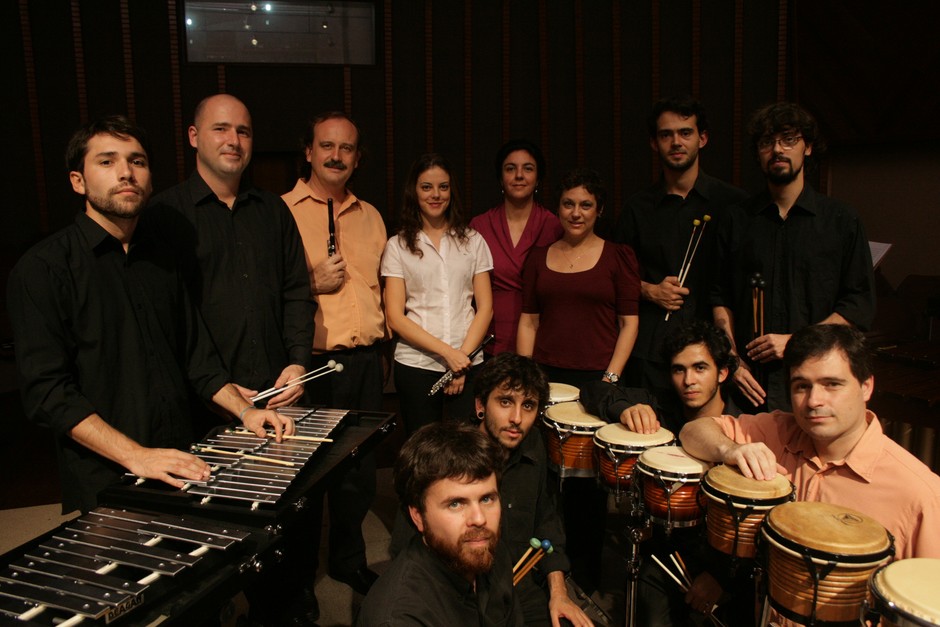 "Drumming - Percussion group" was founded in Porto in 1999. The group has been synthesized the evolution of erudite percussion in Portugal and in western culture. It has rapidly earned the public and the critic’s sympathy, and today it is a reference in the Portuguese musical life, performing in the main concert halls of Portugal: Centro Cultural de Belém, Fundação Gulbenkian, Culturgest, Teatro Camões, Teatro Rivoli, Teatro Nacional de S. João, Fundação de Serralves, etc., as well as in
Spain, Belgian, France, Germany, Brazil, etc.

Resident group for musical programming in Porto 2001 - European Cultural Capital, it has contributed to promote great contemporary plays, also creating its own repertoire, encouraging dozens of national and international composers to write plays for the group, exploring the most diversified, various and imaginative forms and ways of expressing percussion, earning progressively several publics in that area. what has never been heard before. Under the direction of Miguel Bernat, percussionist and pedagogue of international prestige, funding member of Ictus Esemble from Brussels and collaborator of the Contemporary Dancing Company Rosas from Anne Teresa de Keersmaeker, Drumming distinguishes itself for its singular programming, which sums up the experiences of the director’s professional life, with the variety, diversity of styles and formation of its members.

Drumming explores musical areas such as: contemporary music, Rock-Jazz-World Music, music for theatre scenes, Opera and ballet dance. The group’s activity goes also through collaboration with other groupings like the Orquestra Gulbenkian, Orquestra Nacional do Porto, Remix - Ensemble Casa da Música, Quarteto Montagnana and solo players like the singer Maria João or the violoncellist Ivan Moniguetti, among others..

Drumming - percussion group tries to maintain a stylish and thematic coherency, going through sound innovation and the poetics of the musical show as a total and unique scenic moment.