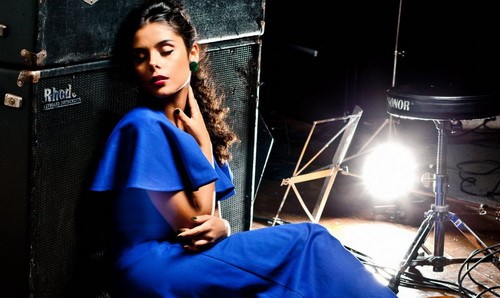 Elisa Rodrigues began her musical studies in 1994, to integrate the School of Music of the Sunshine Coast as a member of the choir Estoril Boys Choir, under the direction of Teresa Lancaster (chorus), Maria Repas (chorus), Mário Marques (vocal training ), Stela Lalova (music education) and conductor Nikolay Lalov (orchestra).

In 1997, started guitar lessons. When she was fifteen years old decided to leave two choirs and began to interest in jazz language, after attending the first workshop of music Cascais taught by teachers of jazz JB.

In 2003, he joined the School of Music Michel Giacometti where attending guitar lessons and ensemble, under the direction of John Mouse. Two years later started classes in vocal technique with Professor James Pereira Bastos.

Starting in 2007, participates as a singer jazz project nouvelle and ELLE, together with José Dias (guitar), Alcides Miranda (guitar), Nuno Oliveira (bass) and Alexandre Alves (drums). Since then, maintains an active collaboration with pianist Júlio Resende Together Elisa Jordan created the group and Júlio Resende - Intuition, which gave rise to Elisa Roberts Quartet.

Elisa Rodrigues recorded her debut album, “Heart Mouth Dialogues”, in 2011. And right there she reflected a personalized language that translated the taste of multiple references and a learning with different influences, especially the one that earned her, especially in the musical environment. , to be identified as a jazz voice. She was shortly afterwards recruited to record with the British band These New Puritans on the 2013 album “Field Of Reeds”, eventually joining the group's intercontinental tour. She left her fingerprint on high-profile international stages such as the Barbican (in London) or the mythical Hollywood Bowl, in Los Angeles. Around here she was present in several festivals such as Vodafone Mexefest, Cool Jazz, MED, Douro Jazz. In 2018, Elisa Rodrigues released “As Blue As Red”, her second long-term album, in which names that have passed through the Festival da Canção in recent years such as Luísa Sobral, Joana Espadinha or Pedro da Silva Martins collaborated.