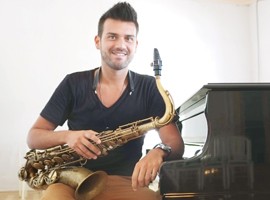 Born in Vila Franca de Xira in 1982. He began his musical adventure when he was five years. He studied at the Conservatory Regional Silva Marques de Alhandra in class guided by Professor Joseph Sax Massarrão.

Participated in various workshops and Masterclasses with José Massarrão, Victor Santos, Jean-Yves Fourmeau, Stéphane Laporte, David Binney and Massimiliano Donninelli. Attended in the first National Tour of Big Band National Youth.
He teaches saxophone at the Music Academy of Stª Cecilia Conservatory in the Conservatory of Santarém and Lisbon Metro. It is a founding member of CUTSAX - Saxophone Quartet Lisbon.

Attends in Degree of Saxophone at the School of Music. He is a member of the orchestra of the TV show "Herman Sic".