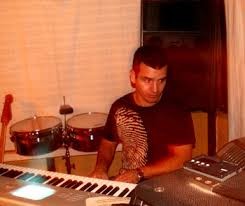 Born in Buenos Aires, Argentina, in 1972. It began his studies of piano at the age of 12, with the conductor Guillermo Iscla. In parallel it studied in the National Conservatory Lopez Buchardo. Musicians' son, inherited the gift of his mother (pianist). From boy it revealed a great affinity with the instrument (piano), playing in the piano popular pieces of ear and imitating other pianists. It grew gone of music, hearing the tangos touched by his grandmother the piano and the tests of battery of the father. His interest for the music made growing so, helping it in his academic apprenticeship. In 1998 already in Portugal it knows the guitarist and North American composer Eddie Gold, who helps to develop it the language of the jazz. There are 15 years in Portugal, it worked with several artists and participated in countless musical formations of several styles. It accompanied the singer Maria Anadon and the fado singer Anamar, the North American guitarist Eddie Gold, Joana Espadinha, between others. Robinho Antunes integrated the quintet of the Brazilian trompetista, and the quintet of latin whose jazz Latinomecanica is a musical director. In May of 2004 it does a tour in Portugal with the singer and Cape Verdean composer Mário Lúcio, passing over the Great Auditorium of the General Box of Deposits, Cultural Centre Gil Vicente, in Inhabitant of Coimbra and other places of the Country. In 2003 it participates in the Concert of the Peace, in Angola, with the singer Waldemar Bastos. In 2007 it was believing whose quartet of tango “ Tanguissimo “ is a pianist and musical director. At present it accompanies the lyric singer Up to Macedo, doing a series of concerts in Portugal and abroad, presenting his disc KIBUKIDILU in rooms like Opera of Cairo, in Egypt, House of the Music of Oporto, Small Auditorium of the C.C.B. in Lisbon.