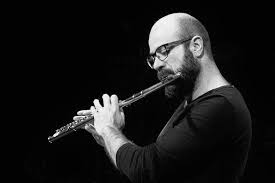 Guto Lucena is a Brazilian musician living in Europe since 2000. He has obtained a bachelor's degree in music at UNICAMP (State University of Campinas) in 1999 and a master’s degree in jazz performance at Royal College of Music in Stockholm in 2015. Besides his work as a musician and music teacher, he continues on the academic field studying music pedagogy at the University College of Music Education in Stockholm - Sweden (SMI) and Doctor degree in music at the University of Hull, UK.

During his 30 years of an international career as a professional musician, he has recorded over 60 albums as an instrumentalist (saxophones, flutes and clarinets) and as composer and arranger. Jazz is his main style and he has wide experience in many different styles such as Brazilian music, pop and afro-Cuban music. He’s played and recorded with Ivan Lins, Ann-Sofi Söderqvist (ASJO Big Band), Svante Thuresson, Mike Mainieri, Arild Andersen, European Jazz Orchestra (EJO Big Band), David Murray, Carmen Souza, Maria João and Mário Laginha, Ben Charest, Melissa Walker, Philip Hamilton among many others. Guto lived in Lisbon between the years 2000 and 2013 and has performed and recorded with great Portuguese artists such as Rui Veloso, José Mário Branco, Sérgio Godinho, Pedro Abrunhosa, José Salgueiro, Mário Laginha, Ficções, José Peixoto, Tora Tora, Big Band of Portugal’s Hot Club, and five years in a live television show “Herman Sic” as musician on a resident band. Guto has taught on the master’s degree in jazz interpretation at the University of
Aveiro and JB Jazz in Lisbon and several workshops and masterclasses in Sweden, Portugal and Brazil.

Nowadays Guto lives in Stockholm, Sweden where he besides his academic path is working as a composer, arranger and music teacher.