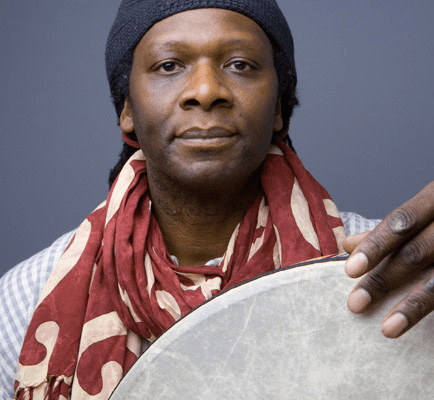 Hamid Drake, born August 3, 1955, is an American jazz drummer and percussionist.
By the late 1990s, Hamid Drake was widely regarded as one of the finest percussionists in jazz and improvised music. Incorporating Afro-Cuban, Indian and African percussion instruments and influences, Drake has collaborated extensively with the best free-jazz improvisers. In the late 1970s, he was a member of the Mandingo Griot Society of Foday Musa Suso was influenced by reggae throughout his career.
Hamid Drake has worked with trumpeter Don Cherry, pianist Herbie Hancock, saxophonists Pharoah Sanders, Fred Anderson, Archie Shepp and David Murray and bassists Reggie Workman and William Parker (in many lineups)
He studied drums extensively, including eastern and Caribbean styles. He often plays without sticks, using his hands to develop subtle tones of command. His tabla playing is notable for its subtlety and talent. Drake's questioning nature and interest in Caribbean percussion led him to a deep involvement with reggae.
Guto Lucena