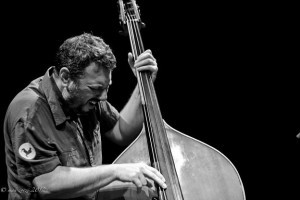 After establishing his name during the Eighties as an electric bass guitarist in alternative rock bands, like the now legendary K4 Quadrado Azul, Hernani Faustino turned to avant-jazz and free improvised music and chose the double bass as his self-taught instrument. Two decades later of multiple interactions with Portuguese and international musicians, he’s now considered one of the most intense and solid bassists in the Portuguese scene. The association he maintains with drummer Gabriel Ferrandini (RED trio, Nobuyasu Furuya Trio & Quintet, Rodrigo Amado Wire Quartet) has been pointed as a dynamic and powerfulrhythm section . His visceral playing is well showed by the contortions of his face during a performance: he goes to the limits of pleasure and pain.

Music is his life: besides being a musician, he was one of the members of the label Clean Feed, considered one of the five more important on the planet in what regards jazz, and the Trem Azul Jazz Store, located in Lisbon. He also composed for theatre, produced radio programs, and wrote about music in a couple of magazines. A good part of his activity in photography is also music oriented:  Faustino is one of the most accomplished stage photographers around. This says all about his passion and commitment.