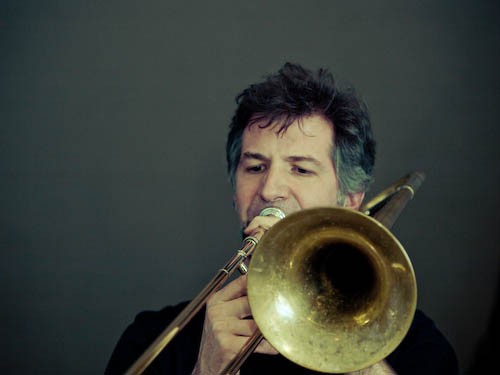 Born in Raleigh, North Carolina, during the Cuban missile crisis. He began playing trombone at 10 years old under the tutelage of Cora Grasser. Other influential teachers in the initial phase of their training were Jeanne Nelson, Eric Carlson, Richard Fecteau, Greg Cox, and James Cozart.

He majored in trombone at Northwestern University, studying with Frank Crisafulli. He returned to Raleigh after deciding he did not want to pursue a career as an orchestral player. While studying engineering, and feeling drawn to the rock scene of Raleigh, touched (Bass) in various rock bands over the years that remained in the hometown.

In the mid- 80s, spent two years in Belgium, studying Philosophy at the Catholic University of Louvain, Belgium.

On returning to the United States passed the University of Chicago, where he earned academic honors. Chicago was instrumental in his return to music. By 1993, he had a strong network of contacts among the most active improvisers the " windy city", participating in the Flying Luttenbachers, Unheard Music Quartet and Trio Rev as bassist and playing ( as a guitarist ) with Weasel Walter , Ken Vandermark and Kevin Drumm .

Later in 1995, Bishop joined the Vandermark as a founding member grupono he remained until 2004. During this period, it became a constant presence in groups like the Peter Brötzmann Chicago Tentet, School Days, Ken Vandermark’s Territory Band.

In addition, during this time formed the Jeb Bishop Trio, and has become an inescapable figure in ad - hoc and improvised music concerts in Chicago.

Based in Chicago, Bishop also participates in projects such as the Exploding Star Orchestra or Rob Mazurek Globe Unity Orchestra, starts to be considered since 2001, by Down Beat magazine as one of the talent deserving wider recognition.