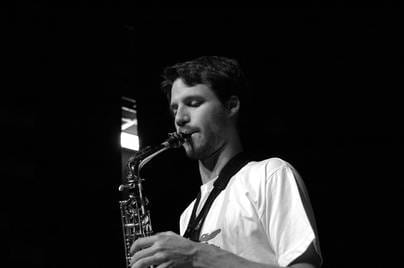 João Guimarães is a musician from Oporto born in 1984. He studied jazz and saxophone with Mário Santos and Pedro Sousa Silva. In 2006 he finished his studies in the jazz área at ESMAE – Escola Superior de Música, Artes e Espetáculo, where he studies with Mário Santosm José Luis Rego, Carlos Azevedo, Pedro Guedes, Nuno Ferreira and Afonso Pais. In 2009 he won the scholarship Fullbright, that led him to take his masters degree, in 2011, at the Manhattan School of Music in New York, where he studied with Steve Wilson and George Garzone, David Liebman, Phil Markowitz and Nils Vigeland.

Since 2008 he integrates the Orquestra Jazz de Matosinhos and has participated in different projects, including collaborations with pianist Paula Sousa, the bass player Demian Cabaud, the guitar player Nuno Costa. He was part of a duo with the drummer João Filipe Pais, and the trio Hitchpop.

He collaborated with Gustavo Costa, Susana Santos Silva, Hot Club Big Band, Mário Santos, Travis Reuter, Allan Mednard, Ohad Talmor, Leon Boykins, Sebastien Ammann, David Virelles, Simon Jermyn and Jakob Sacks. He has an octet formed under the partnership established in 2013 between Guimarães Jazz and the record label Tone of Pitch, that resulted in the album “Zero”, acclaimed by the critics as one of the albums of the year. João Guimarães Octeto participated in the Porta Jazz in 2014 and 205 at the 13ª Festa do Jazz do São Luiz in 2015.