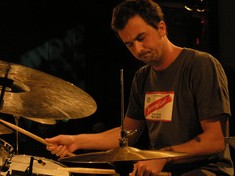 Joao Lencastre is a drummer/composer native from Lisbon. Started playing the drums at the age of 13 and he is now one of the most active and creative musicians on the Portuguese musical scene. He has played all different kinds of music, from avant-garde Jazz to mainstream, Alternative Rock, Afro Beat, Reggae, Metal, World, Electronic / Dance, etc. His interest in jazz started when he first joined the Hot Club Jazz School in 1995, where he studied with the drummer Bruno Pedroso.

Apart from Portugal, has also played in different venues around the world, including New York, Prague, England, Spain and Panama. Over the years, JL had extensive training and practice, in order to stay continuously up to date on new styles and improve his knowledge and skills, which included private lessons with some top drummers, either in England, with Mark Mondesir or in New York with Ralph Peterson, Billy Kilson, Ari Hoenig and Dan Weiss.