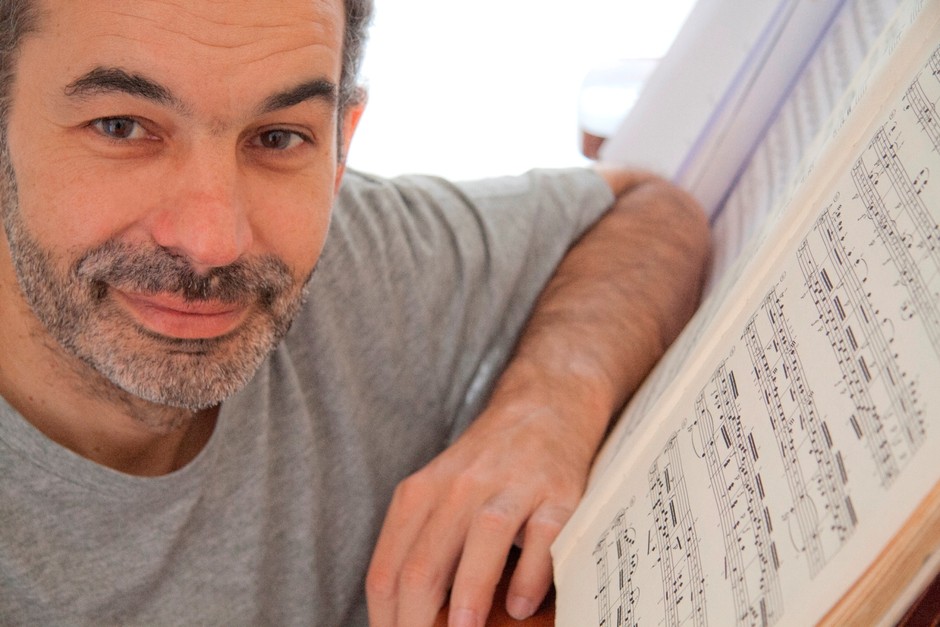 Born in Lisbon in 1961, pianist mother. Started very early his musical studies at the Academy of Santa Cecilia, starting immediately on piano. Later, he joined the National Conservatory, where in 1984 he received the diploma Advanced Course in Piano with full marks. With a scholarship from the Secretary of State for Culture, moves immediately to Paris. Then, for three years, deepening his studies at the Conservatoire de Rueil-Malmaison and successively obtained the highest distinctions - Medaille d'Or, Prix Jacques Dupont, Prix d 'Excellence and the Prix Perfectionement.

After his studies, stays in Paris for four years, giving many recitals in France and the U.S., among which are those of New York (Carni Hall in 1986 and Carnegie Hall in 1989). However, when leaving Portugal in 1984 to halt an already extensive activity in jazz and popular music area. The first public reflection that comes his musical activity in 1979, with the participation of the group Fifth Crescent in Cascais Jazz Festival 79. Luis Caldeira (saxophone), Laurent Philippe (trumpet), Peter Wallenstein (bass) and José Martins (drums) made this training, which still lingers in the memory of many people. In addition to John Paul (piano). Between 1979 and 1981, with the bassist and drummer José Eduardo Martins, form one famous trio at the time, it has developed concerts and served as the basis for monitoring the numerous foreign musicians. It is also from this period his work as a professor at the School of Jazz Hot Club of Portugal.

In the field of popular music, also this time, participates as a pianist accompanist in numerous discs national artists. Noteworthy is his collaboration with Fausto (‘For this upstream'), José Mário Branco (‘be supportive') and Sérgio Godinho. It was with the latter that has developed a more intense work: accompanied him in performances and worked primarily as a musician (1981), the 'Corner of mouth ' album, later (1983) being the arranger and musical director for the album 'Coincidences' in 1992, after eight years in France, returned to Portugal and immediately reconstructs the professional relationships that interrupted in 1984. Collaborates then as arranger and musical director on the album that Vitorino composed on texts by António Lobo Antunes 'that I'm moved by everything and me nothing' (1992). Great job signing this disc does not escape criticism, earning him a special distinction: José Afonso award that Amadora City Council allocates annually to the best work of Portuguese music- first delivered to an arranger. Sérgio Godinho, companion of yesteryear now rediscovered, writes 'Permanent Ink' (1993), which is in charge of arrangements and musical direction, a task that also extends to the performances, most notably ordering Lisboa'94 brought to life the Lisbon Coliseum.

Still in 1993, founded with pianist Mario laginha the chamber orchestra 'Souls and Dances', in March 1995, took a memorable concert at the Belém Cultural Center in 1994 working in 'L' Amar', the disc debut Filipa Pais, who composes three themes, makes the arrangements and musical direction. Simultaneously performs a series of improvisations in the National Cinematheque as a companion silent films and acts as soloist with the Orchestra of the North. He regularly collaborates with musicians like Thomas Pimentel, Carlos Martins, Pedro Caldeira Cabral, Mario laginha, and Maria João Pedro Burmester, among others. These collaborations result numerous concerts and participation in another album, 'Taking Off' (1994), the debut album by trumpeter Thomas Pimentel septet. Along with Jorge Reis, Mario Franco and Jose Salgueiro, form the quartet of John Paul. It is with these musicians who writes 'Saw worm', the first album in his name and that now constitutes the core of his musical activity. Sérgio Godinho: 1980. I had been talking about him, and Carrapa Ze Luis Caldeira, and whispered me his name as if it were a mystery: There is a person called John Paul, who sits at the piano and leftover praise. Moreover, the fact that John Paul came with his piano by 'Corner of mouth' inside, sauntered your glow interpreter and arranger for 'Coincidences', by my first Coliseum for many performances that marked me. The track went to France and then came back even better and made me the 'Permanent Ink‘. I owe you some important sounds of my life, and this is indeed, a mystery that I feel like sharing. There is a person called John Paul 'Mario laginha' John Paul is a musician with unique features. His enormous talent encompasses the composition, interpretation and improvisation. Has an immense musical intelligence and is still a highly stimulating to share ideas, opinions and experiences musician. These days, listening to inspirational music is not, in my opinion, at all ordinary. The music of John Paul’s! Let us enjoy the privilege of listening to Vitorino. Words for what? What is good is to hear it live. Does not yield one iota in essential. It is lord of a prodigious hands and a great talent. Moreover, is a great friend! Is João Paulo Esteves da Silva 'DISCOGRAPHY: With Sérgio Godinho' Corner of mouth' (Polygram, 1981); 'Coincidences' (Polygram, 1983); 'permanent ink' (EMI, 1991) With Fausto. For this upstream (CBS / Sony Music , 1982) With José Mário Branco, 'Being supportive' (Edison, 1982) With Vitorino,' that I 'm moved by everything and me nothing ' (EMI , 1992) Septet With Thomas Pimentel 'Taking Off' (El Armadillo, 1994) With Filipa Pais 'L' Amar' ( Strauss, 1994) In its own name: 'Saw worm' Lighthouse ( 1995), 'Souls and Dances' Lighthouse( 1996) 'The exile'. Pope John Paul: piano, carlos spout: contrabass, peter epstein: saxophones( Marecordings 1999) 'Souls' - Pope John Paul: piano , carlos spout : contrabass , peter epstein : saxophones (Marecordings 2000) 'Corner' - Pope John Paul: piano, peter epstein: saxophones (Marecordings 2000) 'Sunrise' - uses / japanese - john paul: piano, ricardo days: accordéon, peter epstein: avril saxophones ( Marecordings 2001) ' Wheel portugaises les suites ' - empreinte digitale / nocturne - john paul en france soil ( juin 2002) piano.