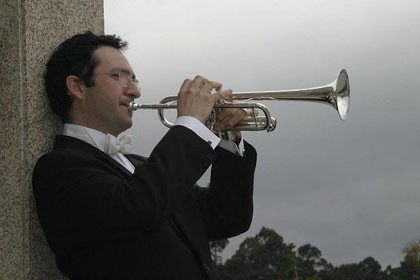 He began playing solo even before starting HIS studies musicians’ official teaching, ease and comfortable in assuming the role of soloist, whatever the public, the ground or the surrounding conditions.

He began his musical studies on the trumpet at the age of eleven, at the Academy of Music of São João da Madeira under the guidance of teachers Fernando Baptista and José Macedo, members of the RDP Symphony Orchestra and Régie Symphony. In the course of his musical studies in that academy, he received a scholarship from the Calouste Gulbenkian Foundation.

Regarding the national competitions for soloists, got the first prize in 1987, mid-level, still highlighting this same date the invitation of TSF. Michael Henriques, Director of the Portuguese Musical Youth, performing a concert at the Porto Commercial Atneu.

In 1993, he enrolled at the invitation of Mr. Major Silverio de Campos, in Symphonic Band PSP performing soloist roles as First Deputy Head. In 1995, the National Academy Orchestra began Degree in Orchestral Instrumentalists, having as teachers Douglas Stephenson, David Burt, Robert Chambers and Philip Navat. Participated in two stages with the Metropolitan Academic Orchestra, led by Maestro Jean Sebastean Béreau, teacher CNSM Paris. In the same year, was admitted to the place of The Soloist in Macao Chamber Orchestra, as well as teacher of trumpet at the Conservatory of that country.

In 1996, played in the 96-98 season functions Soloist B, the Lisbon Metropolitan Orchestra in which he recorded the musical "EXPO 98 ". During this season, he worked as a freelancer with leading national orchestras, OJ, ONP, among others. During this period, it is admitted to the place of The Soloist in the Portuguese Symphony Orchestra. Also received masterclasses with teachers Philip Smith, Rod Franks, Vizzuti Allen, Eric Aubier and John Miller.

Presented himself as a soloist with the O.A.M.L., o.n. Templar and Portuguese Symphony Orchestra, having also played the Sonata by Paul Hindemith, integrated interpretation of all the composer's works in solísticas Culturgest. Made a number of orchestral recordings for EMI and Marcopolo publishers and as soloist with the RDP Antenna 2.

Its versatility also led him to participate in several soundtracks advertisements. Since 2001 has been invited to give masterclasses, notably VI and VII Summer Courses of Caldas da Rainha, the VI Summer Course in Santa Maria da Feira and I Summer Course Arrifana (Feira).

Between 2001 and 2003 he held the post of Principal Trumpet invited by the Lisbon Metropolitan Orchestra as well as the Professor of Trumpet and Chamber Music at the National Academy Orchestra. Also taught at the Academy of Music and Professional Walls School of Music Thorn.

He is currently Principal Trumpet in the Portuguese Symphony Orchestra. It is also the first trumpet in Group Metals Seixal, the place it occupies since 2001, within this group, was a member of the organizing XIII and XIV Masterclasses Seixal, with stakeholders the most prestigious musicians metals World.

It stands out for last participation in the Jazz Festival Trench of the Friars (Alcobaça) where he joined the group Jazz Hybrid Project Tribute to Stan Getz.