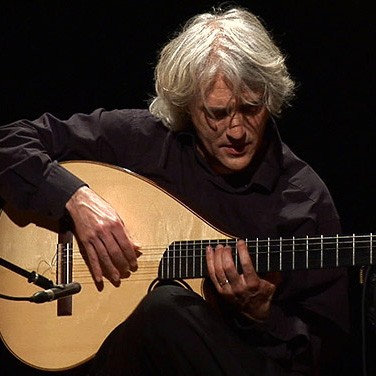 In 1981, the General Course concludes the Classical Guitar Academy of Music Amateurs, later continuing his studies with Professor Piñeiro Nagy. He taught thereafter in the same institution teaching for ten years.

He worked as a musician, arranger and composer with some of the prestigious names of Portuguese Music - Maria João, Janita Salomé, José Mário Branco, Vitorino, Júlio Pereira, Pedro Caldeira Cabral, Rui Veloso, Madredeus, among others.

It was one of the founders and principal songwriter of the music group instrumental "SHISH" with which he recorded in the trio, LP "Venues" in 1987, having as a guest violinist Carlos Zingaro.

In late 1989 creates, along with bassist Carlos Bica jazz, the group "VIVA CAL". With this group, recorded the CD "Cal Viva", performs several tours through Germany and participates in festivals in Europe and Asia (Macau).

In 1992 creates a new trio of instrumental music with guitarist Mario Delgado and drummer Jose Salgueiro who writes the CD "Taifa" published in 1993.

Since 1993 member of the "MADREDEUS" group with whom he recorded the CD "Spirit of Peace", "Still", "Paradise", " Port ", "Movement", "Endless Love" and "Faluas Tagus" having made ​​several world tours. In the same year, create a team with José Salgueiro (co-producer), Cristina Sampaio (illustrator) Paulo Curado (musician and composer), Nuno Artur Silva (writer and screenwriter) and José Mário Branco (composer and arranger) at which develops the draft Children's song "Good Day Benjamin" - CD and book - published in 1994 and sung by Maria John

Even in 2000 is edited by Musicoteca album "Yellow and other tones" with eight pieces for guitar, one of which, that gives name to the album, is the compulsory piece in the entrance examination for the course Guitar School of Music Lisbon.

In 2005, writes a set of 13 invites improvisation and violinist Carlos Zingaro to participate, joining this song ever recorded. Born the CD "Cacus" published that same year.

In 2008, reborn "El Fad" disc with the participation of Carlos "Zingaro", Miguel Leiria Pereira and Vicky.