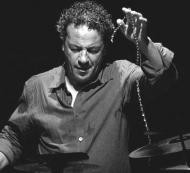 He studied at the Academy of Music Amateurs, National Conservatory of Lisbon, and Hot Club of Portugal. In the field of popular music plays and records with Trovante, Sérgio Godinho, Zeca Afonso, José Mário Branco, Rui Veloso, Endurance, Pedro Burmester and others.

Investments in projects Pipers Lisbon, Bernardo Sassetti, Carlos Barretto, João Paulo and Paulo Ribeiro are constants. It is one of the co-founders of the project For Tim Tim Tim Tum and producer of many musical works, covering areas as diverse as pop, jazz, traditional and children's music. 98 conceived from an invitation Expo '98, the show ' Adufe ', which has been shown across the country and abroad.