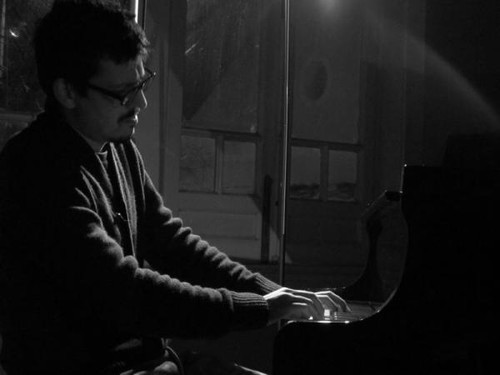 Luis Figueiredo was born in Coimbra in September 1979.

Completed the Course of Piano Music Conservatory of Coimbra and later Degree in Piano at the University of Aveiro, where he studied with Vitali Dotsenko and Fausto Neves, among others. Discipline taught piano in the Conservatories of Coimbra and Guarda. Later he devoted himself to jazz, studying at the Hot Clube de Portugal Filipe Melo, Bernardo Moreira and Bruno Santos, among others.

Since 2004, has performed both solo or incorporated in various formations, both in classical music and improvised. It has also done collaborations in theater, particularly with the Company Teatro Praga (Lisbon) and The Teatrão (Coimbra).

Since 2006, is a doctoral candidate in Music (Jazz Performance) at the University of Aveiro, where he conducts research on issues of musical identity in Portuguese jazz pianists and develops instrumental improvement. This project has theoretical guidance of Professor Susana Sardo and practical guidance from Mario laginha. Still works at the Center for Jazz Studies AU, which is responsible for managing the website and programming.