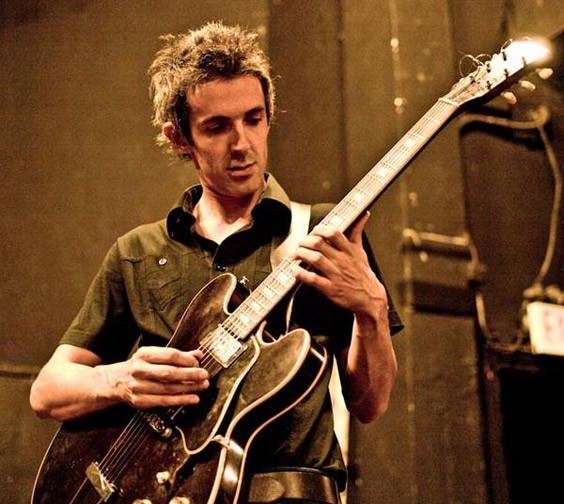 Averse to any linearity, the Idiosyncratic Luís Lopes, a musician connected to Jazz, improvised and experimental music, has been building his career, a simple and singular story, characterised by a unique voice, free of corsets, formal ties  or constraints and mannerisms regarding strict stilistical implications. He is an unfollower… experiments himself through paradoxes. Invokes teachings by following standards of subversion to any possibility of pre-established idea. Eminent self-subversion… Introspective timeless trance.

Running Multi-international groups, especially he’s Humanization 4tet (with Portuguese Rodrigo Amado and Texan’s Aaron and Stefan Gonzalez), Lisbon Berlin Trio (with Germans Christian Lillinger and Robert Landfermann), plus his highly recommended records he is growing as an international artist, playing at important Festivals and venues not just in Portugal but in Europe and U.S.

Coming from a rock/punk and blues background, while studying at local classic and rock schools, he began studying Jazz at Hot Club Portugal School and then was finalist at Escola de Jazz do Barreiro/Lisbon. Then did studies with Saxophonist Joe Giardullo who opened for him the doors of modern jazz harmony complexity through the George Russell’s “Lydian Chromatic Concept of Tonal Organization”, plunging Lopes into the world of improvised and experimental music, without disregard for his fascination with distorion and guitar feedbacks, expressed in different incursions into noise music, while also canalizes energys towards projects where he can develop his composing abilities.