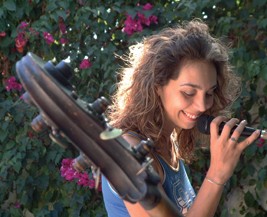 Born April 16, 1976 in Lisbon, daughter of musician. From an early age had contact with a rich and varied musical environment.

She attended singing lessons in 1996 taught by Luisa Bastos. In 2000 and during four years with Barbara Lagido and since recently with Ana Paula Oliveira. In 2003, he attended the 1st year of the general course of jazz (piano and musical training) in JBJazz.

In December 2009, he was challenged to create a Workshop "Jazz Club for Grown Ups" which opened the program the Factory of Arts - Cultural and Educational Service CCB under the new direction of Magdalene Wallenstein.

Maria Morbey has, since 2009, collaborated with the Gil Foundation (Time of music in hospitals across the country), this framework adapted the workshop "Jazz Club" in a version to be presented to children in a hospital. It could be said that Mary Morbey is committed to giving their contribution to sensitizing future generations (in various contexts) for the Jazz.