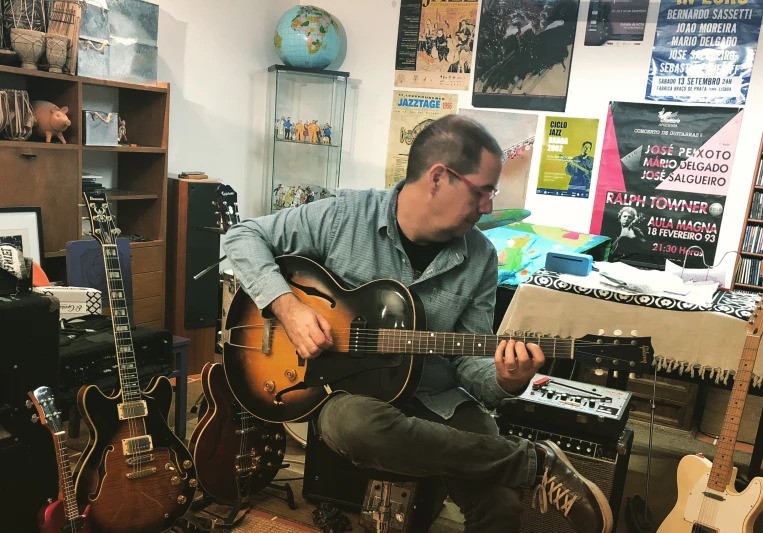 Mário Delgado was born in 1962, in Águeda. In Lisbon he started his music studies at Escola de Jazz do Hot Clube de Portugal, in the class of Zé Eduardo and David Gausden, having participated there in various combos and groups that were usually formed by students. He posteriorly dedicated himself to the classic guitar, having studied with José Pexisoto e Piñero Nagy at the Academia de Amadores de Música de Lisboa. During this initial phase, he participated in various groups with David Gausden, Carlos Martins, Maria João, Nana Sousa Dias, and played with various foreign musicians that came to Portugal, which consolidated his bases in jazz, and defined a music personality that is very idiosyncratic and at the same time, very open and eclectic. During this time, Mário Delgado participated in seminars and workshops, mainly with Bill Frisel, Atila Zoller, John Abercrombic, Barney Kessel, Kenny Burrel, David Liebman, Gary Burton, Jimmy Giuffre, Steve Lacy, Derek Bailey, Hans Benink, Zé Eduardo, Red Mitchel, Paul Motian, Joe Lovano and Hal Galper.

Mário Delgado has collaborated and still collaborates regularly with Portuguese musicians from various genres, from jazz to rock, or even popular music, such as Anamar, José Mário Branco, Mafalda Veiga, Lua Extravagante, amongst others, and he is a musician in the bands of Jorge Palma, and in the band of Mario Laginha and Maria João, being even the music director of the singer Janita Salomé.

Delgado is a guitarist with varied techniques and resources in the electric guitar. This comes from the diverse styles and his own influences, that goes from rock to jazz, popular music to traditional, reusing in an intensive and creative way, creating unexpected patterns, dissonances, unknown and exquisite sounds, always in a lightly experimental and avant-garde tone.