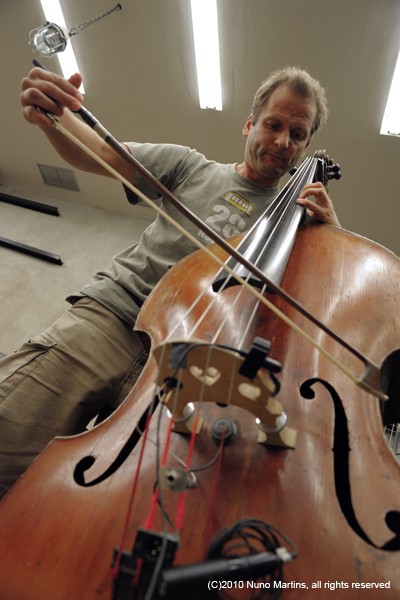 Born in October 1965 and began his musical studies at the Center for Studies Gregorian Lisbon. At the Academy of Music studying Amateur Bass with Fernando Flores and composition with Peter Rock. Very early he is interested in Jazz, a member of the Hot Club since 1982. After having studied electric bass with António Ferro, begins to take lessons with David Gausden in school and participate in the Club Jam Sessions, also participated in workshops with Rufus Reid, Niels Henning Orsted Peterson, Eberhard Weber, etc. In order to broaden your experience in improvised music played between 1985 and 1987 with the Miso Ensemble. Attended in 1986 and 87 in Estoril, Bass courses by Professor Ludwig Streicher. In 1988 won 1st prize in the young musicians. Later he was part of Youth where he worked the "classic" repertoire under the guidance of Christopher Bochmann Symphony Orchestra.