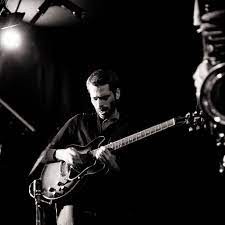 Câmbio (Carimbo Porta-Jazz), his first album as a leader, includes a repertoire of originals that premiered at Casa da Música as part of the cycle Novos Valores do Jazz. This project has been hosted by some of the best festivals and halls in the country. He began his guitar studies at the Porto Jazz School.

In 2002, he completed the Classical Percussion course at Escola Profissional de Música de Espinho under the guidance of Miquel Bernat. He participated as a guest musician in Drumming and in several musical projects with percussionist Andres “Pancho” Tarabbia. He studied at ESMAE with Nuno Ferreira and Afonso Pais. He was part of the ESMAE representative group at the 5th, 6th and 7th Festa do Jazz do S. Luiz, and the formation was awarded the 1st prize.

He taught between 2010 and 2012 in Curso Profissional de Jazz do Conservatório de Música da Jobra. He is part of the academic staff of the Escola de Jazz do Porto.