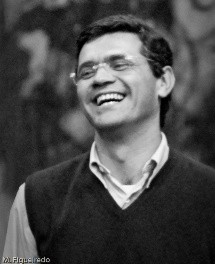 Born in Azambuja in 1970 and began his musical studies. In 1989, he joined the Navy Band. In addition, from 1991 becomes the clarinetist of Dixie Gang, a group with 2 CDs recorded several representations of Portugal and abroad.

It was part of the Modus Ensemble Clarinet (1992-1999) and José Canongia Clarinet Orchestra. In 1992, he formed a duo with pianist Ana Cristina Bernardo that remains in operation since that time. In 1994 together with his clarinet teacher, Manuel Jerómino formed a duo who performed several concerts clarinets. In 1999 the quartet of clarinets low - Grāvītis with whose he performed in Metz (France) with the Entertainment Musical - Theatre - Graoully, Etienne Lamaison was born. Also that year was born the Quintet Ruben Alves had the honor to represent Portugal in the Contest Jazz Avignon (2001).

Discipline taught clarinet in the Regional Conservatory of Loures and Setúbal and is since 1991 professor of clarinet at the School of Jazz Hot Club of Portugal. Has conducted master classes all over the country.