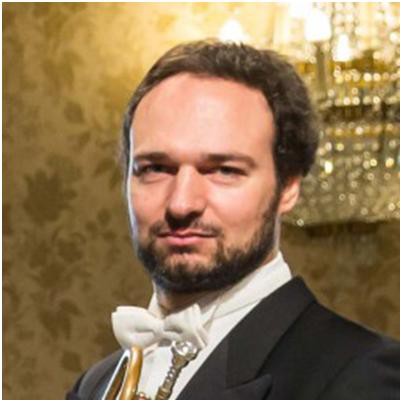 He began his musical studies at age 8 in Portalegre, in the Musical Society Euterpe.He studied at the Conservatoire Regional de Portalegre, the Academy Luisa Todi Setúbal and National Academy Orchestra, where he worked under the guidance of David Burt and Phillip Nava.

Attended Masterclasses in France and Germany, with E. Aubier, C. Garrque and Bo Nilsson.Was a finalist in the International Competition for Young Trumpeters in Bremen in Germany.

Participated in the Mediterranean Youth Orchestra, with whom he recorded a CD. It is effective musician Portuguese Symphony Orchestra. The year 1999 marked the beginning of a regular job with teachers Philip Smith (New York Philharmonic Orchestra) and Rod Franks (London Symphony) . He is Professor at the University of Évora and regularly collaborates with the Gulbenkian Orchestra and Big Band Hot Club of Portugal.

It is regularly invited to advise Masterclasses throughout the country.Has made several solo recitals in Portugal, Spain and France.