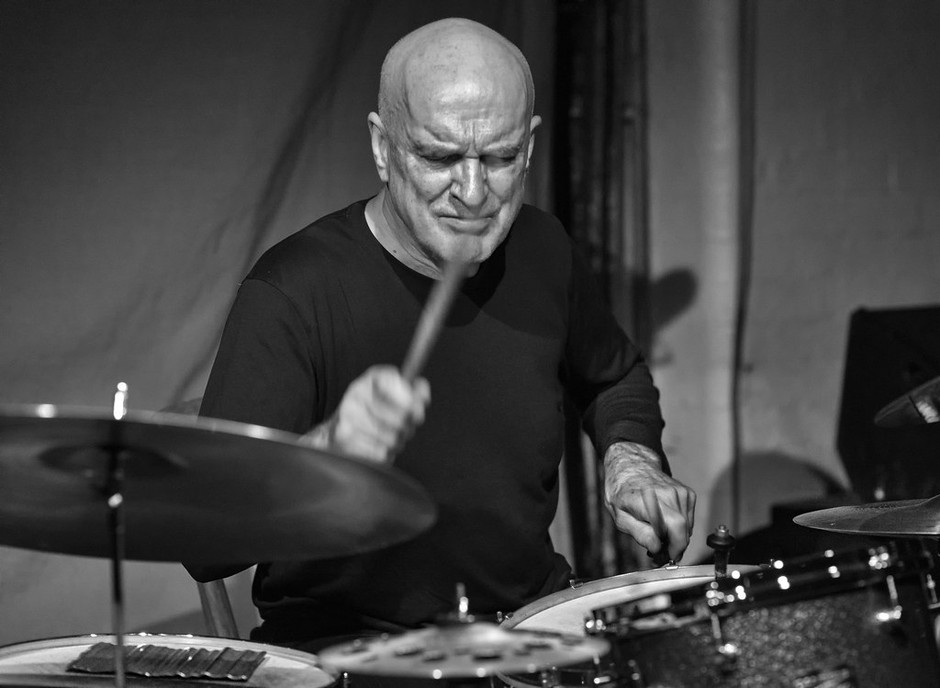 Veteran Roger Turner has a career spanning 50 years, a giant number of collaborations and more than 30 albums since 1966. He grew in Whitstable, a coastal town on the eastern tip of the UK, and absorbed the roots of jazz present in Canterbury in the 60s, beginning to play drums during his youth encouraged by the brothers.

His first performance of improvisation music was given as early as ‘66, when he performed at the British Council with Chris Biscoe in Brighton; In the same year, he moved to London and worked with the Ghanaian percussionist ensemble Mask and toured with the Ritual Theater.

Since 1974, he has focused primarily on breaking new ground for a more personal percussion language, and this goal leads him to work on his individual music extensively, playing at the Bracknell Jazz Festival and the Bruxelles Festival of Percussion. In the 1980s, he received two Arts Council grants to continue his research on percussion and electronic instruments. During this period, he recorded and edited the LP The blur between, a solo work that focuses on very specific aspects of percussion. Later this decade, she made an artistic residency at Alan Silva's Institut Art Cultur Perception in Paris and collaborated with Annette Peacock and Birmingham post-wave band The Nose Flutes.

In terms of collaborations in the jazz world, he has worked with Elton Dean, Alan Silva, Lol Coxhill, Toshinori Kondo, Carlos Zingaro, Derek Bailey, Evan Parker, Otomo Yoshihide, Wolfgang Fuchs, and Keith Rowe (and many more). In the world of film and image projection, Turner has collaborated with Martin Klapper and Chikako Oyama, and has worked with Alexander Frangenheim in Stuttgart, with the Matthew Hawkins Company in London and Carlos Zíngaro on their Encontros project in both Lisbon and Macau. . It is also worth mentioning that since 2006 he has been working intensively with several Japanese musicians, including Kazuhisa Uchihashi, Yoshihide Otomo, Tetsu Saitoh, Masahiko Satoh, Akira Sakata and Akio Suzuki, having already done 3 tours in the Japanese country.

Prior to his first job with JACC Records, with the name Corda Bamba, he worked regularly with Alan Silva and Johannes Bauer on The Tradition Trio; with Lol Coxhill and Mike Cooper in The Recedents; with Tim Hodgkinson and Thomas Lehn at Konk Pack; Veryan Weston, Phil Minton and John Butcher at the Phil Minton Quartet and, last but not least, in duo format with John Russell and Phil Minton. Has been to and played at festivals in Scotland, England, Portugal, Italy, Austria, Norway, United States of America, Switzerland, France, Germany, Canada, Macau.

The Touching Extremes magazine does an incredible job of describing him in 2006: "can begin a roll on the toms and end it on your Ming-dynasty vase… a drummer who defies any categorization; his complex artistry could easily rack the brains of the unprepared … "Touching Extremes, 2006