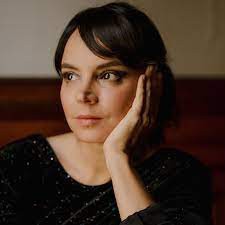 Natural from Lisbon, the Portuguese Sara Serpa is a singer, compositor and improviser who, from her practice and performance, explores the use of voice as an instrument.

Serpa has been working in the field of jazz, improvision and experimental music since she moved to New York in 2008. Literature, movies, and visual arts, nature and history, inspire Serpa in her creative process and in the development of her music.

Classified by the New York Times as a “singer of a silvery posture and cosmopolitan appearance” and from JazzTimes magazine as a “ master of the silent landscapes”, Serpa started her career with prestigious jazz musicians like the pianist, Grammy-nominated, Danilo Perez, Guggenheim and MacArthur, Ran Black and Greg Osby. As a leader, she produced and released ten albums, being the last one called Recognition, released in june 2020. A multidisciplinary and singular work that traces the historic legacy of the Portuguese colonialism in Africa, through the image of sound and movement, Recognition presents Zeena Parkins (harp), Mark Turner (saxophone) and David Virelles (piano).

In 2018, Serpa debuted Intimate Strangers, a collaboration with the Nigerian writer Emmanuel Iduma, an interdisciplinary musical performance that portrays the trips of the writer through various African countries.