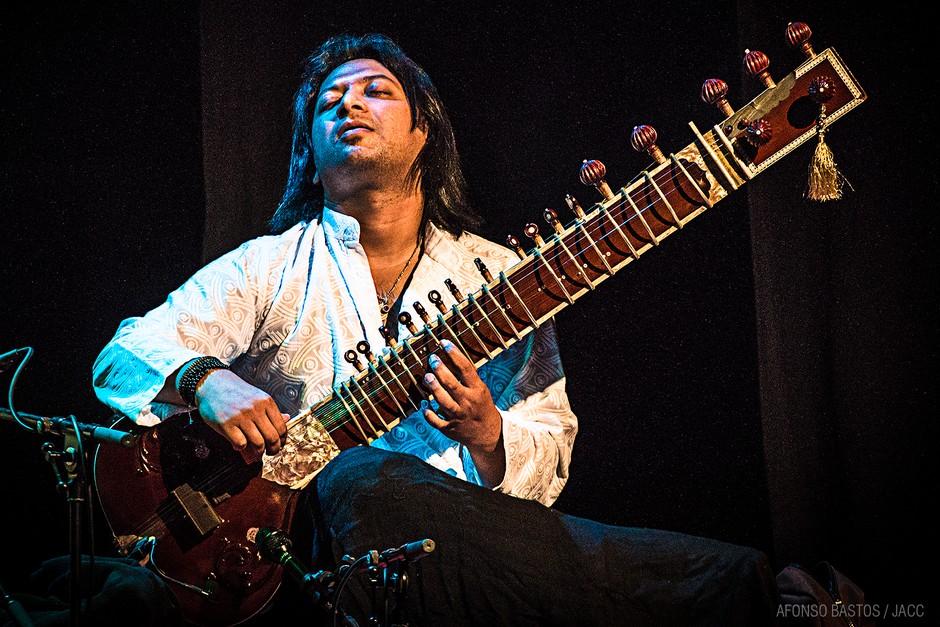 is acclaimed as one of the most sensitive and dynamic young classical sitar players internationally, energetically following in the musical footsteps of his prodigious father and Guru — the sitar maestro Ustad Shahid Parvez Khan. Like his father, Shakir Khan stands out for his exquisite melodic exposition, his intricate and sophisticated sense of rhythm, and his astonishing flawless instrumental technique. Shakir is an incredibly warm, charismatic and open performer who has ably adapted his knowledge and skill in Indian classical music to contemporary collaborations including performances and recordings with the European Jazz ensemble “Taalism,” and Indian bands “Mukti” and “Soundscape.”Shakir represents the eighth generational link in an unbroken chain of musical talent and tradition poured exclusively into the sitar and surbahar. A chain that includes, besides his father, the musical legacy of Ustad Aziz Khan (Shakir’s paternal grandfather), and that of the patriarchal surbaharist Ustad Wahid Khan (Shakir’s great grandfather). He is also a close blood relative of the great sitarist Ustad Vilayat Khan.

Under his father’s guidance, Shakir’s talent emerged and was developed early in his life giving his first public solo performance at the age of eleven. His growth as a musician allowed Shakir to accompany his father on stage on many occasions – a father-son duet that veritably explodes with energy. Shakir has performed brilliantly for prestigious music conferences in India including the Dover Lane Music Conference (Kolkata), Sawai Gandharva music festival Pune. the Saptak Music Festival (Ahmedabad), Bombay Festival (Mumbai), the Tansen Music Festival (Gwalior), the Shankarlal Music Festival (Delhi) and many more. He has also performed extensively worldwide, bringing the joy and subtlety of the Etawah Gharana to audiences in the US, Canada and Europe, including a performance at the famous Woodstock Festival in Poland in 2008. Shakir’s talent has also been recognized through a Government of India merit scholarship, first prize at the All India Radio (AIR) Music Competition, and the 2008 award for Best Upcoming Artist of the Year from the Padmayan Charity in Mumbai. Khan has released the Raags Bageshree & Pilu on on the CD “Zubaa” with Tabla accompaniment by Hindol Majumdar, Raags Rageshree & Yaman through the Album “Shakir Khan,” accompanied by Aditya Kalyanpur on Tabla, and Raags, Sham Kalyan, Pilu, Bihag and others through the Ustad Shahid Parvez Khan Academy of Music. His fusion work has been released on the Quinton label as “Circle of Taalis.”The Pune Mirror described Khan’s performance of raag Yaman at the Sawai Gandharva Sangeet Mahotsav festival 2010 as “mesmerizing,” and the Indian Express wrote that “Khan has not only lived up to the expectations of his father, but has also received appreciation as a prodigious talent by great masters such as Pandit Hari Prasad Chaurasia, Pandit Jasraj and Ustad Zakir Hussain.” A performance with Shakir Khan is an electrifying and inspiring experience combining the greatest depth of and subtlety of the Indian Classical tradition with youthful energy and musical innovation, he is to be treasured as the highly talented repository of one of the world’s oldest and greatest classical traditions.