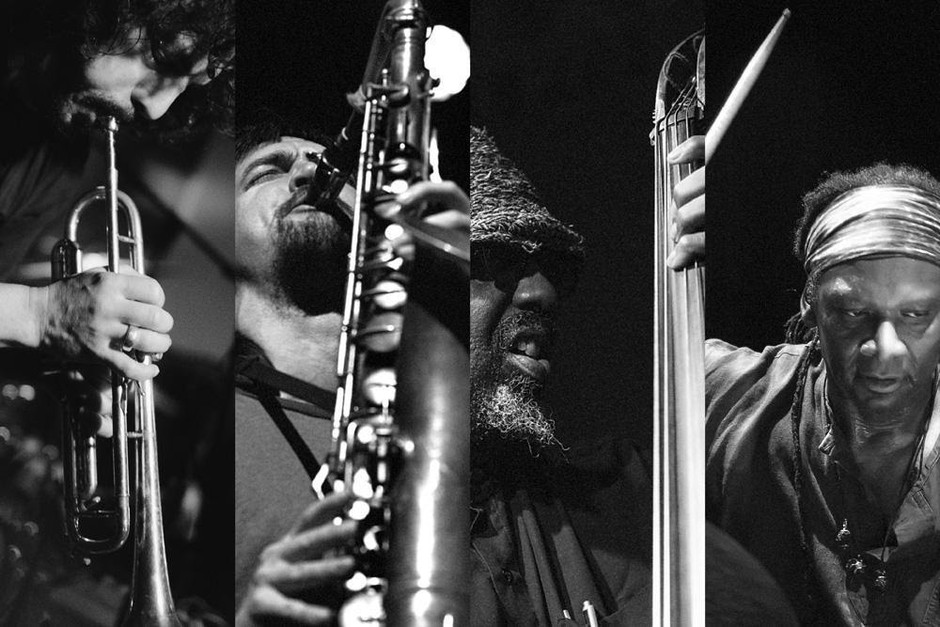 Portuguese prolific trumpeter has played in the last decade with musicians from all over Europe, often with American ex-pat, tenor sax player John Dikeman, who resides in the Netherlands. On «Goes without saying, but it’s got to be said» Vicente jumps to the big league and him and Diklemam join the mighty rhythm section of American double bass player William Parker and drummer-percussionist Hamid Drake, who have been working together for the last thirty years, as a duo, in William Parker bands and with heavyweights like with Peter Brötzmann, Frode Gjerstad, David S. Ware, Fred Anderson, Kidd Jordan, and also Dikeman («Live At La Resistenza», El Negocito/Tractata, 2015).

«Goes without saying, but it’s got to be said» was recorded live at Galeria Zé Dos Bois (ZDB) in Lisbon in July 2020. The three, free-improvised pieces are credited to all four musicians. The performance begins with the 27-minutes «1st Sentence», introduced by Parker and Drake, but soon Vicente and Dikeman soar over Parker and Drake’s powerful and irresistible groove and develop a dense but soulful interplay. Dikeman opts for a more raw and rough approach compared to the clear and round but super-fast lines of Vicente, who often alternates with brief melodic and lyrical lines and occasional timbral search. Later Drake and Parker intensify the soulful-funky dimension of this piece, triggering poetic responses of Vicente and Dikeman.

The short «2nd Sentence» takes a completely different course, a quieter and gentle one. Propelled by the meditative and hypnotic pulse of Parker and Drake, Dikeman and Vicente exchange emotional, melodic ideas, that eventually end in an ecstatic coda. On the last «3rd Sentence» Drake, on vocals and frame drum, and Parker, on the North-African gimbri, take the lead and offer a ritualist, call-and-response mode, with Drake chanting verses from the Qur’an. When Vicente and Dikeman join this kind of devotional interplay, both add beautiful, lyrical gestures, stressing the humble and most humane atmosphere of this piece and ending it with a whisper.

William Parker asks in his liner notes what is the thing that makes music work, even in these Covid-19 pandemic times. His answer: love and ultimate improvisation. Goes without saying that Parker is right and this was a magical performance.