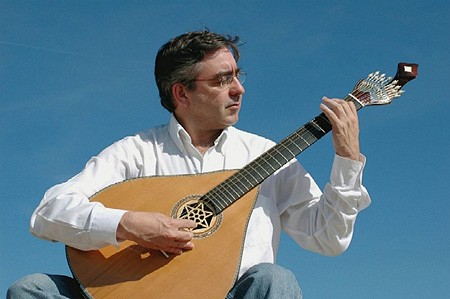 António Eustáquio was born in Portalegre and now lives in Castelo de Vide. Although he spent a long time in Lisboa, he prefers the Alentejo, because of “its silence and fresh air.”
Professor of Musical Education at a public school, he thinks teaching is his main professional activity, despite his intense musical activity.
He spent several years searching for new directions for the Portuguese guitar, which is easy to see if you notice some of the titles of his discography, where for example, we can find "Antonio Vivaldi in Portuguese guitar."
Accompanied by the “Camerata Lusitana”, he materialized Carlos Paredes’s wish, when he confirmed the expressive possibilities of the Portuguese guitar as a solo instrument, playing works that require a great virtuosity.
Contact with Guitolão is a defining moment.
Nowadays he is one of the two owners of the instrument suggested by Carlos Paredes and made reality by the master Gilberto Grácio.
The first disc with this instrument was released in late 2008, where we hear António Eustáquio playing next to the "Ibero-American Quartet."